States are sewing a patchwork of AV regulations 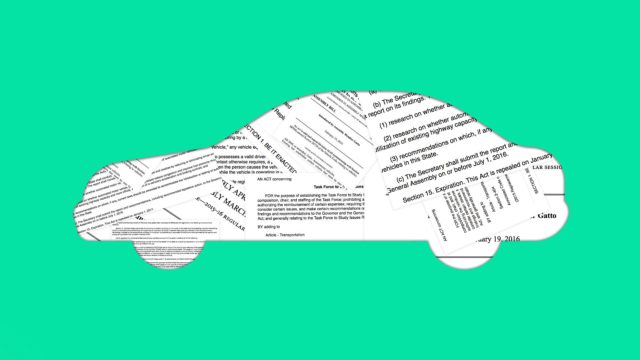 Drive.ai — a startup developing an on-demand autonomous shuttle service — is based in Silicon Valley, but it has deployed its first vans in Texas, drawn in by the state’s favorable regulations.

Why it matters: Without a national regulatory framework for autonomous vehicles, states have become laboratories not just for the technology itself, but also for the rules emerging to shape it.

The big picture: Federal legislation that would create national parameters for testing and deploying AVs passed the House but is stalled in the Senate, leaving states to create their own rules for now. Automakers worry that, without federal standards, they’ll have to deal with a patchwork of state laws that would hamper a broader roll-out of the technology.

That leaves companies shopping for testbeds among the states. Their efforts will decide which Americans get to hitch a ride in an autonomous car first — and which cities will reap the potential economic benefits of self-driving vehicles, along with any problems.

For Drive.ai, Texas strikes a Goldilocks medium between highly regulated states like California and those with lax rules, like Arizona, said the company’s CEO, Sameep Tandon.

The statewide rules and processes mean companies that expand into Texas will have access to a bunch of sprawling, populous cities, many of which are actively pursuing driverless car testing or deployments.

The state of the states beyond Texas:

Where the companies are testing:

As companies get closer to deploying self-driving cars that are available to the public, state rules around consumer transportation will be even more important.

The other side: Some experts argue that self-driving safety regulation should really be done at the federal level.

This article originally published at Axios Autonomous Vehicles on Sep 28, 2018.