Large hadron collider: A revamp that could revolutionise physics 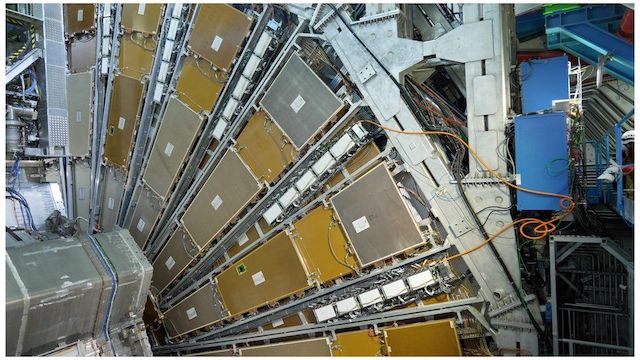 The Atlas detector comprises 7,000 tonnes of metal, silicon, electronics, and wiring, intricately and precisely put together. It is now more powerful than ever.

Deep underground amidst the Alps, scientists are barely able to contain their excitement.

They whisper about discoveries that would radically alter our understanding of the Universe.
“I’ve been hunting for the fifth force for as long as I’ve been a particle physicist,” says Dr Sam Harper. “Maybe this is the year”.

For the past 20 years, Sam has been trying to find evidence of a fifth force of nature, with gravity, electromagnetism and two nuclear forces being the four that physicists already know about.

He’s pinning his hopes on a major revamp of the Large Hadron Collider. It’s the world’s most advanced particle accelerator – a vast machine that smashes atoms together to break them apart and discover what is inside them.
It’s been souped up even further in a three-year upgrade. Its instruments are more sensitive, allowing researchers to study the collision of particles from the inside of atoms in higher definition; its software has been enhanced so that it is able to take data at a rate of 30 million times each second; and its beams are narrower, which greatly increases the number of collisions.

What all this means is that there’s now the best chance ever of the LHC finding subatomic particles that are completely new to science. The hope is that it will make discoveries that will spark the biggest revolution in physics in a hundred years.

As well as believing that they may find a new, fifth force of nature, researchers hope to find evidence of an invisible substance that makes up most of the Universe called Dark Matter.

The pressure is on the researchers here to deliver. Many had expected the LHC to have found evidence of a new realm of physics by now.

The LHC is part of the European Organisation for Nuclear Research, known as Cern, on the Swiss-French border, just outside Geneva. As one approaches, it seems an unremarkable complex – blocks of 1950s office buildings and dormitories, sprawling across a two and a half square mile site of manicured lawns and winding roads named after revered physicists.