This Small Company Is Turning Utah Into a Surveillance Panopticon

Banjo is applying artificial intelligence to government-owned surveillance and traffic cameras across the entire state of Utah to tell police about “anomalies.”

The state of Utah has given an artificial intelligence company real-time access to state traffic cameras, CCTV and “public safety” cameras, 911 emergency systems, location data for state-owned vehicles, and other sensitive data.

The company, called Banjo, says that it’s combining this data with information collected from social media, satellites, and other apps, and claims its algorithms “detect anomalies” in the real world.

The lofty goal of Banjo’s system is to alert law enforcement of crimes as they happen. It claims it does this while somehow stripping all personal data from the system, allowing it to help cops without putting anyone’s privacy at risk. As with other algorithmic crime systems, there is little public oversight or information about how, exactly, the system determines what is worth alerting cops to. 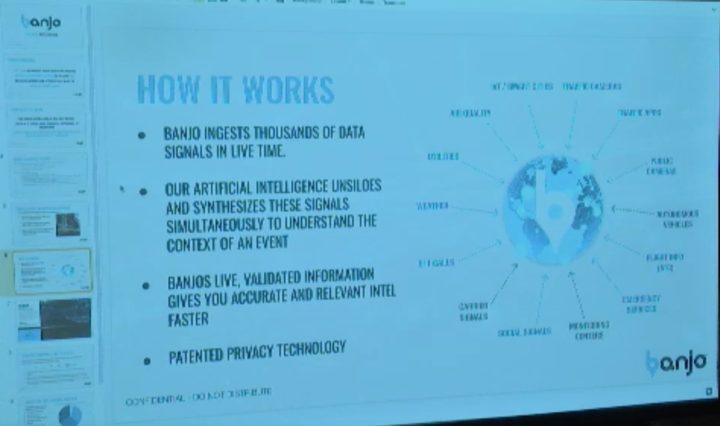 In its pitches to prospective clients, Banjo promises its technology, called “Live Time Intelligence,” can identify, and potentially help police solve, an incredible variety of crimes in real-time. Banjo says its AI can help police solve child kidnapping cases “in seconds,” identify active shooter situations as they happen, or potentially send an alert when there’s a traffic accident, airbag deployment, fire, or a car is driving the wrong way down the road. Banjo says it has “a solution for homelessness” and can help with the opioid epidemic by detecting “opioid events.” It offers “artificial intelligence processing” of state-owned audio sensors that “include but may not be limited to speech recognition and natural language processing” as well as automatic scene detection, object recognition, and vehicle detection on real-time video footage pulled in from Utah’s cameras.

In July, Banjo signed a five-year, $20.7 million contract with Utah that gives the company unprecedented access to data the state collects. Banjo’s pitch to state and local agencies is that the more data that’s fed into it, the better its product will work. Thus, the company has spent the last year trying to get as many state and local agencies as possible to give it access to its CCTV and traffic cameras, audio sensors, and other data.