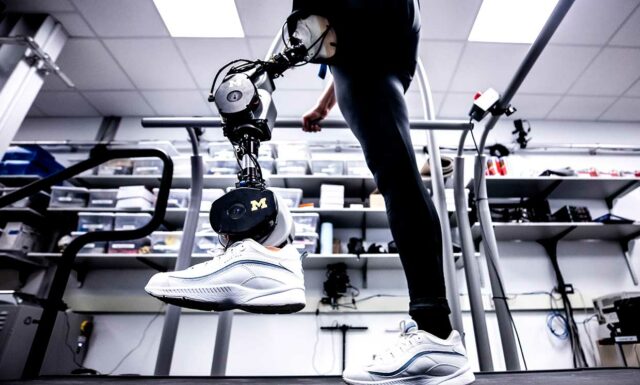 Details on the design and clinical tests of an open-source bionic leg are now freely available online, so that researchers can hopefully create and test safe and useful new prosthetics.

Bionic knees, ankles and legs under development worldwide to help patients walk are equipped with electric motors. Getting the most from such powered prosthetics requires safe and reliable control systems that can account for many different types of motion: for example, shifting from striding on level ground to walking up or down ramps or stairs.

However, developing such control systems has proven difficult. “The challenge stems from the fact that these limbs support a person’s body weight,” says Elliott Rouse, a biomedical engineer and director of the neurobionics lab at the University of Michigan, Ann Arbor. “If it makes a mistake, a person can fall and get seriously injured. That’s a really high burden on a control system, in addition to trying to have it help people with activities in their daily life.”

Part of the problem with designing these control systems is the fact that many research groups don’t have access to prosthetic legs for testing purposes. As such, they have to either build their own, which is expensive and time-consuming, or rely on virtual testing, which may not adequately emulate real-life situations.

To solve this problem, Rouse and his colleagues have developed the Open Source Leg. The scientists detailed their research findings online today in the journal Nature Biomedical Engineering. Accompanying the artificial limb are free-to-copy step-by-step guides meant to assist researchers looking to assemble it or order parts for it. The Michigan group has also produced videos illustrating how to build and test the hardware, and has developed code for programming the prosthetic to walk using a preliminary control system.

The scientists focused on keeping the Open Source Leg relatively easy to assemble, control, and maintain by reducing the number of parts and suppliers needed. The knee and ankle joints can operate independently, allowing research in patients with above-knee and below-knee amputations. In addition, each joint has on-board batteries and its own set of sensing and control systems, enabling test outside the laboratory. Also, a number of the Open Source Leg’s design and control features can be customized to fit specific research needs, such as the foot type and the knee elasticity.

A key part of the new prosthetic’s design is the use of brushless electric motors developed for the drone industry “that were not previously used in our field,” Rouse says. These flat, pancake-shaped devices give up speed in exchange for more torque, allowing for more efficient, finer control and more human-like movements. Designing these motors to be as light and efficient as possible—a key feature in unmanned aircraft—meant that, in the Open Source Leg, “they made it easier to walk with less fatigue, and the batteries onboard the prosthetic could be smaller,” Rouse says.

The bionic leg they designed weighs only 4 kilograms or so. Although that’s significantly lighter than a biological leg, to patients, it still feels heavier than it is “because it’s not attached to the skeleton; it’s attached to a prosthetic socket,” Rouse says.
All in all, the Open Source Leg costs about $10,000 to $30,000, depending on the options wanted. By contrast, commercially available powered prosthetics cost up to $100,000, the researchers note.

In a new study, the scientists conducted clinical tests of the Open Source Leg with three volunteers with above-knee amputations who had tried other powered leg prostheses. When they wore the new device in a hospital setting, they met goals set by physical therapists such as walking up and down stairs. What’s more, they noted it felt supportive, responsive, and smooth.

“They liked the Open Source leg a lot,” Rouse says. One volunteer “didn’t feel like he was riding it, as he did other prostheses; he said it did what he wanted it to do. He got a feeling of embodiment he didn’t get with conventional prostheses.”

Rouse notes that eight other institutions have asked for the new legs or are building their own. “We’re really impressed with their interest and desire to collaborate with us and willingness to help,” he says. “They’re helping make the system better.”

This article first appeared at IEEE Spectrum on Oct 5, 2020.