I guess they opted not to use the term, “Alexa Inside.”   — Jeff

Amazon has just announced four new designs for PC manufacturers to work off of, which could make it easier to integrate Alexa in more PCs. The new Windows 10 PC designs have been pre-tested and are “final-product designs.” They include far-field microphone arrays so that Alexa can hear you from across the room, and they’re powered by Intel processors. 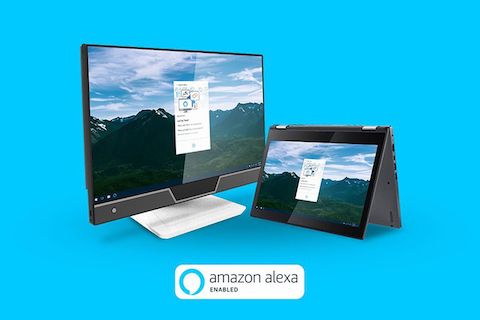 The four designs are made by Taiwan-based manufacturers Wistron, Compal, and Quanta. Wistron has an all-in-one PC with a 27-inch 4K display. It also includes a 1080p webcam with an infrared sensor, four microphones, and two stereo speakers. In addition, Wistron developed a convertible notebook that has a 15.6-inch 4K touch display, an HD camera, eight hours of battery life, four microphones, and two speakers.

Compal made a convertible notebook with a 15.6-inch 4K touch display, an infrared camera, a fingerprint sensor, 13 hours of battery life, a stylus, four digital microphones, and two speakers. Amazon notes that this notebook could be suited for mobile gaming, given its longer battery life and stylus.

Then there’s the Quanta-made convertible notebook with a smaller 14-inch 4K display, no touch, a whopping 18 hours of battery life, a fingerprint reader, four digital microphones, and two speakers. This one is for spending more time outdoors unplugged, as indicated by the battery life.

It’s notable that not every PC on the market today has the specs to fully take advantage of Alexa’s capabilities, as they need to have the wake word engine built-in and far-field microphones to pick up your voice from situations where you’re not right next to the computer. But more and more PCs are getting the integration, from Acer and Asus to Lenovo and HP.

This article originally appeared June 5, 2018 on The Verge – circuit breaker.