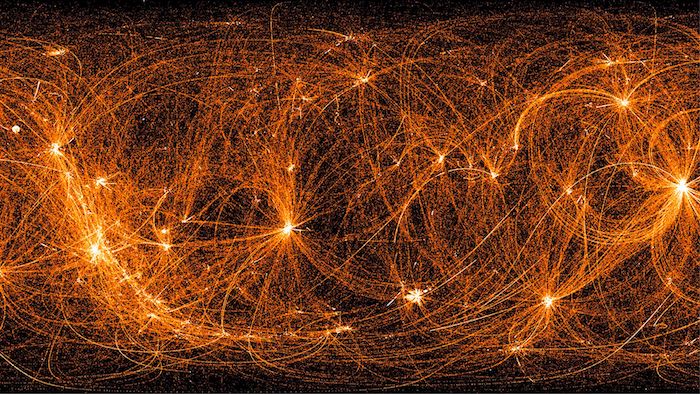 An image of the whole sky showing 22 months of X-ray data from NASA’s Neutron star Interior Composition Explorer payload aboard the International Space Station during its nighttime slews between targets. Image: NASA/NICER

This image, which at first might strike you as a visualization of global flights or shipping traffic, is actually far more otherworldly.

In fact, this is a map of the entire sky in X-rays, as recorded by NASA’s Neutron star Interior Composition Explorer (NICER), aboard the International Space Station.

Why it matters: NICER’s imagery could one day result in a navigation system that would allow spacecraft to navigate autonomously using an X-ray-based map of the solar system.

Details: The map includes data from the first 22 months of NICER’s science operations. Each arc traces X-rays, as well as occasional strikes from energetic particles, captured after sunset.

The arcs form in areas NICER frequently targets for observations, and the bright spots are found at X-ray sources (like galaxies and quickly spinning neutron stars called pulsars) that the mission scientists are most keenly interested in.

“These measurements will finally allow physicists to solve the mystery of what form of matter exists in their incredibly compressed cores,” NASA says.

This article first appeared at Axios Science on June 6, 2019.