Millimeter-Scale Computers: With Deep-Learning Neural Networks on Board

Computer scientist David Blaauw pulls a small plastic box from his bag. He carefully uses his fingernail to pick up the tiny black speck inside and place it on the hotel café table. At 1 cubic millimeter, this is one of a line of the world’s smallest computers. I had to be careful not to cough or sneeze lest it blow away and be swept into the trash.

Blaauw and his colleague Dennis Sylvester, both IEEE Fellows and computer scientists at the University of Michigan, were in San Francisco this week to present 10 papers related to these “micromote” computers at the IEEE International Solid-State Circuits Conference (ISSCC). They’ve been presenting different variations on the tiny devices for a few years. 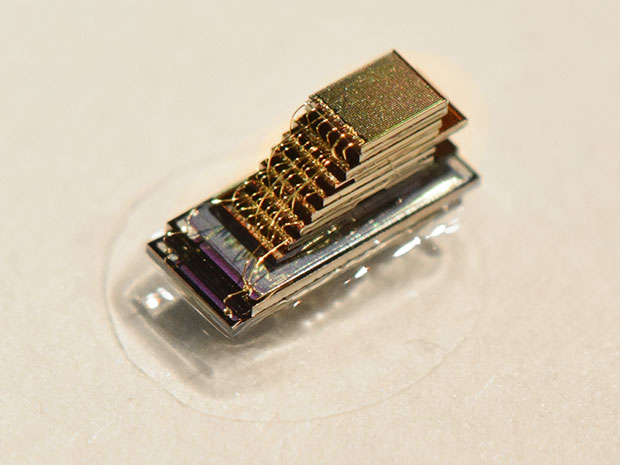 Their broader goal is to make smarter, smaller sensors for medical devices and the Internet of Things—sensors that can do more with less energy. Many of the microphones, cameras, and other sensors that make up the eyes and ears of smart devices are always on alert, and frequently beam personal data into the cloud because they can’t analyze it themselves. Some have predicted that by 2035, there will be 1 trillion such devices. “If you’ve got a trillion devices producing readings constantly, we’re going to drown in data,” says Blaauw. By developing tiny, energy-efficient computing sensors that can do analysis on board, Blaauw and Sylvester hope to make these devices more secure, while also saving energy.

At the conference, they described micromote designs that use only a few nanowatts of power to perform tasks such as distinguishing the sound of a passing car and measuring temperature and light levels. They showed off a compact radio that can send data from the small computers to receivers 20 meters away—a considerable boost compared to the 50-centimeter range they reported last year at ISSCC. They also described their work with TSMC (Taiwan Semiconductor Manufacturing Company) on embedding flash memory into the devices, and a project to bring on board dedicated, low-power hardware for running artificial intelligence algorithms called deep neural networks. 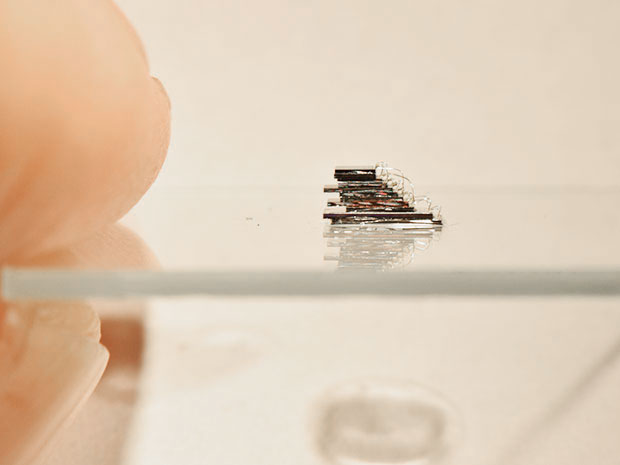 Photo: University of Michigan/TSMC
Made of multiple layers of computing.

Blaauw and Sylvester say they take a holistic approach to adding new features without ramping up power consumption. “There’s no one answer” to how the group does it, says Sylvester. If anything, it’s “smart circuit design,” Blaauw adds. (They pass ideas back and forth rapidly, not finishing each other’s sentences but something close to it.)

The memory research is a good example of how the right trade-offs can improve performance, says Sylvester. Previous versions of the micromotes used 8 kilobytes of SRAM (static RAM), which makes for a pretty low-performance computer. To record video and sound, the tiny computers need more memory. So the group worked with TSMC to bring flash memory on board. Now they can make tiny computers with 1 megabyte of storage.

Flash can store more data in a smaller footprint than SRAM, but it takes a big burst of power to write to the memory. With TSMC, the group designed a new memory array that uses a more efficient charge pump for the writing process. The memory arrays are a bit less dense than TSMC’s commercial products, for example, but still much better than SRAM. “We were able to get huge gains with small trade-offs,” says Sylvester.