Lasers vs. Microwaves: The Billion-Dollar Bet on the Future of Magnetic Storage 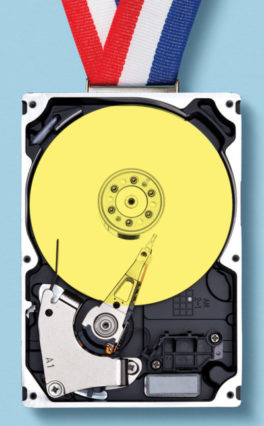 For most of the past 50 years, the areal density of hard disks—a measure of how many bits of data that engineers can squeeze into a given area—increased by an average of nearly 40 percent each year. Lately, though, that rate has slowed to around 10 percent. Everyone who works on magnetic storage is well aware of this problem, but only in the past year or so have executives from Seagate Technology and Western Digital, the leading manufacturers of hard drives, very publicly split on how to solve it. In back-to-back announcements in October 2017, Western Digital pledged to begin shipping drives based on what is known as microwave-assisted magnetic recording (MAMR) in 2019, and Seagate said it would have drives that incorporate heat-assisted magnetic recording (HAMR) on the market by 2020.

If one company’s solution proves superior, it will reshape a US $24 billion industry and set the course for a decade of advances in magnetic storage. Companies that wish to store huge amounts of data do have other options, but hard drives are still the go-to choice for enterprise storage needs that fall somewhere between faster, more expensive solid-state drives built on flash memory, and slower, cheaper magnetic tape.

Seagate now aims to debut a 20+ terabyte drive based on HAMR in 2020, and Western Digital promises MAMR drives that will hold roughly 16 TB later this year. Western Digital expects to quickly scale up to MAMR drives with 40 TB of capacity by 2025, while Seagate believes it can achieve similar capacities through HAMR, though it has not publicly stated a target date.

Both companies are essentially starting from the same place, with hard drives that share a few key components. The disk, for example, is a thin platter that has been coated with some form of magnetic material made up of countless individual grains, each of which is magnetized in one particular direction. Ten or so grains in a cluster, all with magnetization pointing in the same direction, represent a bit.

Inside a drive, a motor spins the hard disk at between about 5,000 and 11,000 revolutions per minute. And just 2 nanometers above the disk hovers the component that Seagate and Western Digital vehemently disagree on how to remake: the read/write head. This head produces its own magnetic field, using it to flip the magnetic orientation of grains as needed to write a 0 or a 1. A sensor on the head reads data back by measuring fluctuations in the magnetic field above a disk as it flies over clusters of grains.

Over time, designers have made these grains smaller and smaller, which allows more bits to be stored in the same area on the disk. But to store even more, the grains would have to become so small that ambient thermal energy could cause them to flip spontaneously, wiping out the data they held.

Shrunken Grains: Five years ago, the smallest grains on a magnetic disk measured 9.5 nanometers (nm) in diameter [left]. Today’s best-performing disks have grains that are just 7 nanometers wide [middle]. With new advances to the read/write head, future disks could rely on grains as tiny as 5.6 nm [right].

To prevent such erasures, manufacturers have begun to use new materials, such as iron-platinum alloys, to make disks with magnetically “harder” grains that will not randomly flip at room temperature. Unfortunately, that change also makes it impossible for traditional read/write heads to flip a grain, because they simply cannot generate a strong enough magnetic field and focus it on such a small area.

What the hard-drive industry needs is a way to flip the magnetization of grains that are more difficult to reorient than ever before. And that’s precisely what Seagate and Western Digital say they’ve developed.

Both HAMR and MAMR make use of a simple strategy: Shoot some energy into the targeted grains on a hard disk and you can temporarily make it possible to flip their magnetic orientation with an external magnetic field of practical magnitude. And as soon as the energy dissipates, the grains regain their immunity to spontaneous room-temperature flips.

At Seagate, researchers wanted to use a laser’s light, but shining a laser directly onto the disk would heat a spot that was too big, causing other grains to flip, too. Somehow, they had to focus the laser’s energy on an area narrower than the wavelength of the light beam itself.

To orchestrate this, the researchers built a head loaded with an infrared laser and directed a fraction of the light it produced to a tiny metal plate that measures just 200 nm across. Seagate researchers call this plate the “lollipop” because it’s shaped like a circle with a short peg that juts out to one side.

When light reaches the lollipop, it excites surface plasmons, which are bunches of electrons of oscillating density that can arise on the surface of most metals. These plasmons pass energy to the peg, whose peculiar shape provides the path of least resistance for the energy to leave the lollipop.

Once at the peg, the plasmons discharge energy into a narrow sliver of the disk through what’s known as the lightning-rod effect. This electrical discharge heats the disk, and for a very brief period, the magnetization of the grains in a small region can be reoriented by a field produced by the read-write head—before a heat-sink layer built into the disk whisks the energy away.

This scheme worked well enough in early tests, but Jan-Ulrich Thiele, managing technologist and senior director for research and development at Seagate, and his team soon ran into a major problem: The peg of the lollipop, which was made of gold at that time, kept melting. It would work for a few minutes and then turn into a tiny golden blob, rendering the drive useless. “We maybe were able to write half a track of data, and then the whole thing would melt away,” Thiele says.

Melt Down: This sequence of images shows the peg of the “lollipop” (also called the near-field transducer) as it melts and recedes from the surface of a magnetic disk in an early version of Seagate’s heat-assisted magnetic recording technology (HAMR).

He recalls a nerve-racking presentation that then-CEO Steve Luczo made to Wall Street analysts in 2012 using a prototype HAMR drive. Seagate had shipped a box of 10 drives and sent along an engineer to accompany Luczo so that if the first drive (or three) crashed, the engineer could quickly swap it out and the presentation could proceed. “On average, those drives back then lasted maybe 10 hours,” Thiele says. “But there was a broad distribution—some of them lasted 10 minutes, and some of them lasted longer, and you never knew which one you had.”

To make HAMR drives more reliable, Thiele’s team redesigned the head to better direct excess light and heat away from the lollipop, switched to a new material, and made the lollipop thicker. Now, Thiele says, a HAMR head can write petabytes of data without failing, and Seagate has built more than 50,000 HAMR drives in its quest to perfect the technology.

But some customers may shy away from the technology based on concerns about the long-term effects of heat on a disk. “Probably most enterprise customers like the MAMR technology a little more,” says John Rydning of the market intelligence firm IDC. “They have slightly more confidence that the tech is less prone to reliability issues over time because you’re not generating as much heat.”

This article was originally published at IEEE Spectrum on Jan 3, 2019.