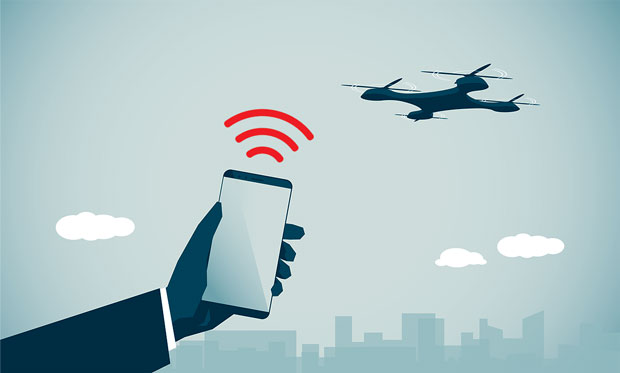 Because they’re so useful for so many things, drones will undoubtedly become a more common sight in the next few years. And as the number of drones in the sky increases, the need to track these mini-flying machines as they move from one spot to another will become more important.

In a recent study in IEEE Transactions on Mobile Computing, a team of scientists in China proposed an intriguing way to track unfamiliar drones through crowdsensing. Their approach leverages participants’ smartphones to detect the Wi-Fi signals of drones.

Tracking drones would be especially helpful in situations where the devices were being used for ill-intentioned purposes, such as for peeping in at someone or to transport illegal substances. But as Zhiguo Shi of Zhejiang University notes, “Detecting drones, especially in urban environments, is not easy. Traditional approaches are of huge cost, since the corresponding equipment, such as radars, cameras, and microphone arrays, are very expensive.”

His team sought to find a cheaper method. They realized that most drones use Wi-Fi technology to communicate with ground control stations. At the same time, virtually all smartphones can detect Wi-Fi signals and phones are abundant, especially in urban settings.

To be able to distinguish between drones and other sources of Wi-Fi, the researchers created a database of known MAC addresses and SSIDs from all commercial drone manufacturers. And if their system detects a MAC address or SSID that’s not in this database, they can analyze the mobility patterns of the Wi-Fi signal to assess the likelihood that it originated from a drone. Their approach also accounts for historical data describing the locations of static Wi-Fi access points, and rules these out. Using data about the strength of the Wi-Fi signal detected by the smartphones, an algorithm in their system can figure out a drone’s location.

In mid-2018, the researchers tested this technique by flying a drone through campus, varying the number of nearby obstacles and smartphones used to detect it. Unsurprisingly, they found that localization became more accurate as more phones were used and the approach worked best when there were fewer obstacles in the way. The localization error could be fewer than 2 meters in some cases, but reached as high as 37 meters when many obstacles were present.

Their system, which the researchers call CEDAR (for Cost-Effective Crowdsensing System for Detecting and LocAlizing Drones), can detect drones within 350 meters and with an average accuracy of 87 percent when no preliminary MAC addresses or SSIDs are listed in the database, suggesting that this approach is fairly effective.

As for the crowdsensing aspect of CEDAR, Shi acknowledges that participants will have to yield some of their privacy rights to assist with drone detection.

“In our system, users need to upload their positions for both detection and localization process,” Shi explains. “In this way, they do have a privacy breach. We treat users’ privacy concerns as a kind of cost, and compensate them by providing rewards.”

Thus the researchers proposed an auction-like scenario, where participants can decide the threshold price at which they are willing to share their location, and then bid against other people nearby for the opportunity.

This article first published at IEEE Spectrum on June 26, 2019.