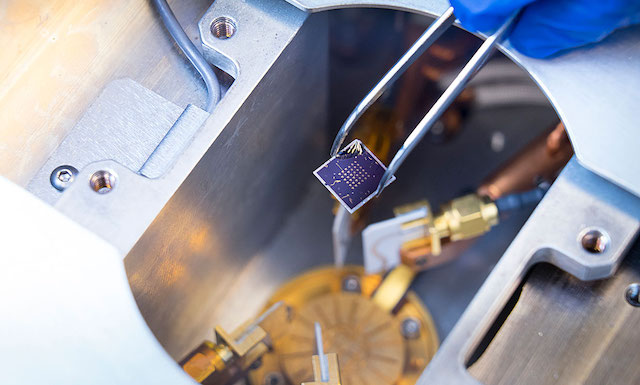 Ferrorelctric semiconductors could be the basis of a high-density memory for neuromorphic chips.

Engineers at Purdue University and at Georgia Tech have constructed the first devices from a new kind of two-dimensional material that combines memory-retaining properties and semiconductor properties. The engineers used a newly discovered ferroelectric semiconductor, alpha indium selenide, in two applications: as the basis of a type of transistor that stores memory as the amount of amplification it produces; and in a two-terminal device that could act as a component in future brain-inspired computers. The latter device was unveiled last month at the IEEE International Electron Devices Meeting in San Francisco.

Ferroelectric materials become polarized in an electric field and retain that polarization even after the field has been removed. Ferroelectric RAM cells in commercial memory chips use the former ability to store data in a capacitor-like structure. Recently, researchers have been trying to coax more tricks from these ferroelectric materials by bringing them into the transistor structure itself or by building other types of devices from them.

In particular, they’ve been embedding ferroelectric materials into a transistor’s gate dielectric, the thin layer that separates the electrode responsible for turning the transistor on and off from the channel through which current flows. Researchers have also been seeking a ferroelectric equivalent of the memristors, or resistive RAM, two-terminal devices that store data as resistance. Such devices, called ferroelectric tunnel junctions, are particularly attractive because they could be made into a very dense memory configuration called a cross-bar array. Many researchers working on neuromorphic- and low-power AI chips use memristors to act as the neural synapses in their networks. But so far, ferroelectric tunnel junction memories have been a problem.

This article first appeared at IEEE SPECTRUM on Jan 14, 2020.