Machines in one FedEx facility are directly replacing human roles but there are no pink slips, yet.

What they do: The tugs are akin to autonomous cars pulling trailers, using lasers and cameras to navigate the warehouse in order to help staff move objects.

Jobs, jobs, jobs: Over time, the ‘bots will replace 25 drivers at the facility. But FedEx adds 100 roles per year there, and says it’s unlikely there will be net erosion of jobs because so much of the work requires manual dexterity lacking in robots. 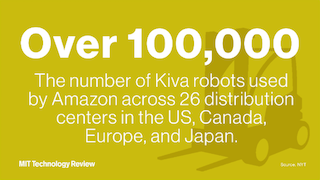 The competition: Amazon—who is launching a business shipping service of its own—has a big head start on FedEx in automating fulfillment and shipping. It is using over 100,000 Kiva robots and about 30 robotic arms to move and lift its products. UPS isn’t being left in the tech dust either. Its ambitious EDGE program is using artificial intelligence to improve accuracy and delivery speed.

A plethora of robots? Fun fact: FedEx named their first three robots Lucky, Dusty, and Ned, after the main characters in ¡Three Amigos!. The next two were naturally called Jefe and El Guapo, after that movie’s main antagonists.