The Pixel, and The Great Digital Convergence

The bit has become the universal medium, and pixels (a particular packaging of bits) now constitute nearly every picture in the world.  Pixar co-founder Alvy Ray Smith argues that the pixel is the organizing principle of most modern media in his new book A Biography of the Pixel, wherein he presents a few simple but profound ideas that unify the myriad varieties of digital image making into what he calls Digital Light.

You are invited to an interview with Dr. Smith as led by CNSV Director Brian Berg that will describe the little-appreciated history of the roles played by Fourier, Napoleon, Soviet Information Theoretician Vladimir Kotelnikov, Britons Tom Kilburn and Alan Turing, and others, in creating The Great Digital Convergence the envelops us all today.  He will also address the problem of ensuring accuracy in technology history, and why the notion that most of us have of the pixel is incorrect.  Far from being trivial, the pixel is a profound concept that, in concert with Moore’s Law, has unified the modern media world. 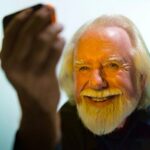 Dr. Alvy Ray Smith co-founded Pixar and Altamira Software (his invented Spanish verb “Pixar” means “to make pictures”).  He was the first Director of Computer Graphics at Lucasfilm, and the first Graphics Fellow at Microsoft.  Alvy has received two technical Academy Awards for his contributions to digital moviemaking technology.  In 1982, he directed the Genesis Demo in Star Trek II: The Wrath of Khan, the first completely computer-generated cinematic image sequence in a feature film.

Slides will not be available for the Main Presentation.

Main Presentation recording will not be available.