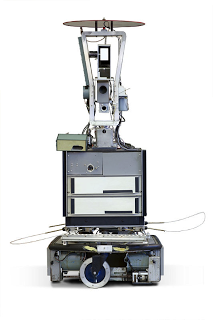 The talk will describe the making of Shakey, the world’s first mobile intelligent robot. The work was done at Stanford Research Institute (now SRI International) from 1966-1972. Peter Hart worked on this project from the day it started until the day it ended – by which time he was the project leader.

In this talk, Peter will describe how the project got launched, how his team approached this new world of robotics, what they actually did, and what the consequences have been for current technology and for modern life. He will also describe what the world was like back then, and how people reacted to the first real-world—i.e., non-fictional—robot. Peter will conclude with some thoughts about what robots might do for human-kind in the future.

The importance of Peter Hart and Shakey in the history of robotics is discussed in John Markoff’s fascinating new book on robotics titled Machines of Loving Grace.

Peter E. Hart has founded or led half a dozen companies and international research centers, and has invented or developed the theory of some of the most widely used procedures in modern computing. His technical writings have been cited over 76,000 times, which according to Google Scholar makes him the most-cited author in Robotics and the sixth most-cited author in Computer Science.

Peter holds over 125 patents, and is a Fellow of the IEEE, ACM, AAAI and the Rensselaer Alumni Association. He is also a Member of the SRI Hall of Fame.