A Brief History of the Second

Captain Kirk said that “space is the final frontier.” He may be right. However, time is giving space some competition.

This talk is about the second:

These topics and more, such as the Roswell Clock, will be considered during this interactive talk with demos. 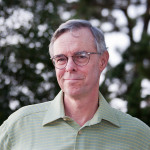 Al Kovalick is the Founder of Media Systems Consulting in Silicon Valley. Previously, he worked for HP as a systems architect and R&D engineer. Following HP he was the CTO of Pinnacle Systems then a Fellow at Avid.

He is an active speaker and educator, and authored the 2009 book “Video Systems in an IT Environment  The Basics of Networked Media and File-Based Workflows“.

Al has a BSEE from SJSU and an MSEE from UC Berkeley. He holds 18 US and foreign patents. He is a SMPTE Fellow, and member of Tau Beta Pi and the IEEE.

This talk will look at the amazing inventions and life story of Robert Adler (1913-2007), including the TV remote control and touchscreens, polymer science and ultrasonics, and a connection with Albert Einstein. A paper originally prepared for IEEE as a eulogy to Robert Adler is available here. An interesting Adler patent that was filed in 1964 and granted in 1992 is here.

Joel Kent, Ph.D., is a staff scientist at Elo Touch Solutions, Inc., a leading manufacturer and developer of touchscreen products. Joel chairs Elo’s patent committee, and is an inventor of over 40 US patents. As the lead physicist at Elo for over two decades, Joel contributed to the development of touchscreen products that anyone attending this talk will have used. Robert Adler was a consultant to Elo for over ten years, where he both managed and mentored Joel.

Prior to joining Elo Touch Solutions, Inc., Joel was an experimental particle physicist collaborating in experiments at SLAC and CERN as a graduate student at UC Berkeley, a post-doc at College de France, Paris, and an assistant professor of physics at UC Santa Cruz.