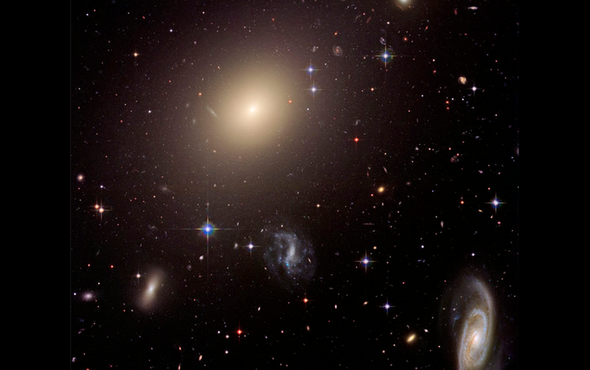 Scientists have tested Einstein’s theory of general relativity to new degrees of precision using the giant elliptical galaxy ESO 325-G004, the yellow ball of stars near the upper left side of this image. Credit: NASA, ESA, and The Hubble Heritage Team (STScI/AURA)

Three years ago astrophysicist Tom Collett set out to test a theory. Not just any theory, but one that sets scientists’ expectations for how the universe operates at large: Einstein’s general relativity. First published in 1915, the theory mathematically describes how gravity emerges from the fundamental geometry of space and time, or spacetime, as physicists call it. It postulates that dense objects, such as Earth and the sun, create valleylike dips in spacetime that manifest as gravity—the force that binds together a galaxy’s swirling stars, places planets around suns and, on Earth (or any other planet), keeps your feet on the ground.

Einstein’s equations underpin a host of real-world applications such as the global positioning satellites that make precise navigation and split-second financial transactions possible around the planet. They also elucidate several otherwise-inexplicable phenomena, including Mercury’s oddball orbit, as well as predict new ones, such as gravitational waves—ripples in spacetime that were only directly observed a century after general relativity’s debut. In test after test, whether here on Earth or in observations of the distant universe, the theory has emerged unscathed—a success so stunningly unshakeable it draws a certain breed of scientists like moths to a flame—each seeking to reveal cracks in Einstein’s edifice that could lead to the next breakthrough in physics.

Collett, a research fellow at the University of Portsmouth in England, is among them. “General relativity is so fundamental to the assumptions we make in our interpretation of cosmological and astrophysical data sets that we’d better be sure it’s right,” he says. With that mind-set, in 2015 Collett partnered with nine colleagues to perform the most sensitive experiment yet to test whether Einstein’s famed theory holds up at the scale of an entire galaxy. Their results, published June 21 in Science, reiterate Einstein’s theory still reigns supreme.

Even so, it is no secret general relativity is in some respects incomplete, and perhaps even fundamentally flawed: It cannot, for instance, explain conditions inside a black hole or during the first instants of the big bang. The theory also has a complicated relationship with a fundamental tenet of modern astronomy and cosmology—the notion that the universe is suffused with dark matter, a mysterious, invisible substance that only interacts with normal matter through gravity.

Astronomers found the first hints of dark matter in the 1930s, spying stars whipping around other galaxies so fast that they should have spun off into intergalactic space; some hidden gravitational hand—dark matter—must be holding them in place. That, or general relativity’s accounting of gravity somehow breaks down at galactic scales, leading to theory-defying stellar motions at a galaxy’s outskirts. Similarly, in 1998 cosmologists found evidence the universe is expanding faster than expected, driven by an even more mysterious dark energy. In 2011 that research netted a Nobel Prize, but its validity hinges on general relativity being the correct description of gravity at cosmological scales.

For their test, Collett and his collaborators focused on two galaxies in a coincidental celestial alignment, with one directly in front of the other along an Earthbound observer’s line of sight. In keeping with general relativity, the “foreground” galaxy’s great bulk warps the surrounding fabric of spacetime, forming a “gravitational lens” that distorts and magnifies the far-distant background galaxy’s light. Precisely measure those distortions, and you gain a good sense of how much mass the foreground galaxy should contain according to general relativity.

Collett’s key insight was this estimate could be readily double-checked by monitoring the motions of stars in the foreground galaxy, yielding an independent mass measurement. Although hundreds of galactic gravitational lenses are known, only a few are sufficiently close by to allow their individual stars to be seen. At just 450 million light-years away—a relative stone’s throw in cosmological terms—this particular foreground galaxy was an ideal candidate for such observations, Collett says. “The original Eureka! moment was when I realized, we can measure this,” he says.

Those measurements required marshaling the combined power of the world’s two most advanced optical instruments—NASA’s Hubble Space Telescope in low Earth orbit and the European Southern Observatory’s Very Large Telescope (VLT) in the Chilean Andes. Collett’s team used Hubble to measure the foreground galaxy’s mass via gravitational lensing and the VLT to measure its mass via the speeds of stars twirling around its edges. After carefully analyzing and comparing the data, they found a striking agreement between these independent mass measurements. With an error margin of just 9 percent, the experiment’s findings are the most precise measurement of general relativity beyond our solar system to date. The results also indirectly support the theory’s validity in the face of dark matter, dark energy and other cosmological curveballs.

“This is one more feather in the cap for general relativity, that’s true—but it’s not true that this really disfavors any other theory” besides a narrow subset of alternative explanations for gravity, says Stacy McGaugh, an astrophysicist at Case Western Reserve University who was not associated with the study. The real value of this new result, he says, comes from its unprecedented scale and precision, which are of relevance regardless of what one’s preferred theory might be. McGaugh should know—he is one of the more open-minded researchers when it comes to alternatives to dark matter and general relativity’s description of gravity. He studies a class of dim, diffuse galaxies that appear to defy some tenets of those theories. “This is another test that any theory you want to build has to satisfy,” he says.

For now, says Tommaso Treu, an expert in gravitational lensing at the University of California, Los Angeles, who is unaffiliated with Collett’s study, any scientists struggling to overturn the unfinished revolution that Einstein began in 1915 must remember that dismissing a time-tested, century-old theory would be an extraordinary achievement requiring equally extraordinary evidence. “Everyone would love to prove Einstein wrong,” Treu says. “There is no better way to be famous.”

That sentiment rings true for Collett, who says he had hoped the results would diverge from expectations set by general relativity. To that end, he is already working on a follow-up experiment, one using a different gravitational lens slightly farther away from Earth to test general relativity all over again.

This article first published at Scientific American on June 22, 2018.